Men and women face many obstacles upon release from prison.  More…

of Support and Accountability (CoSA) supports people who have offended sexually and who have been released from prison. CoSA seeks to reduce the risk of re-offending and to ease an offender’s transition into the community.

Community volunteers come alongside offenders to help them lead healthy and 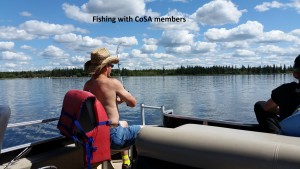 law-abiding lives, offering friendship, support and accountability with a commitment to no more victims. Offenders agree to living responsibly and being accountable for their behavior.

CoSAs are small groups.  In most cases (but not always) each group has one Core member (the offender) matched with volunteers.  The circles typically meet on a weekly basis.

What do we Ask of a Core Member?

Upon agreement with these conditions the Core member and CoSA volunteers prepare a covenant, or contract, to be signed by all parties.

Do the Circles Work?

Close supporting relationships decrease the risk of relapse in child molesters and rapists, according to Grubin (1997)*.

Circles help the core member establish a stable lifestyle. Offenders with domestic stable housing and social support are less likely to commit new offenses compared to those offenders who lack such stability, as reported by Lane Council of Governments (2003).**

Listen to a radio interview with Dr. Robin Wilson about offending and the efficacy of CoSAs (click here).****

Micah visits faith communities and engages support from within those communities, to help persons who have been incarcerated and are seeking to reintegrate back into society.

Other links that may be of interest....
Offenders - Inside ...
Survivors of Crime ...
Volunteer with Micah..
Scroll to top